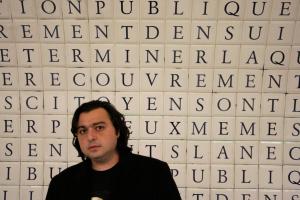 With the announcement last autumn that Turkey will be the market focus of the 2013 London Book Fair, it seems Turkey’s contemporary authors are finally beginning to get the recognition they deserve. Hakan Günday is one such rising star on Turkey’s literary scene. You won’t find English translations of Günday’s work in bookstores yet, but he’s nevertheless made an international name for himself as one of Turkey’s most up-and-coming young writers. The author of seven critically acclaimed novels since 2000, Günday is the only Turkish author invited to the London Book Fair this month. TimeOut Istanbul caught up with him before he left.

You were born in Rhodes, completed your primary education and some of your university years in Brussels, and went to Ankara for high school and most of your higher education. Is one of these places more home to you than the others?

Once you begin to travel as a child, the first place that becomes close to you seems to be your home. When you move for the second time, you quickly understand that you don’t have a home — that home, in fact, doesn’t exist if you keep traveling. My father was a diplomat, so we traveled a lot and I became really used to presenting myself in front of forty other little children with the hand of the teacher on my shoulder, saying, “This is your new friend.” It was difficult at first, and then I became a professional at it.

What led you from academia to a career as a novelist?

When I was a student, I didn’t have any clue about my future profession. I thought political science might be useful and interesting. Now I understand that I was actually searching for the rules that govern human society. I think the most difficult thing in this world is to convince someone that he will be the governed and you will be the governor. But this most difficult thing has been so easy for 2,000 years. It surprises me! Did I find the answer? No. I only had more questions. After five years studying political science in Ankara, I was still in the second class, and they told me that if I continued this way, I wouldn’t be able to graduate.

So the next day I bought a notebook and started to write. I went to a kıraathane in front of my school every day for two months, while I was going to school, and in this kıraathane I wrote Kinyas ve Kayra, my first novel. It was just something I did because I didn’t know what to do with my life. It was the first time I had tried to write anything. I was twenty-three years old.

I went to seven publishing houses with the novel. After one month, Nevzat Çelik, a very famous Turkish poet, called me. He was the editor at the Om publishing house, which was really innovative at that time. Just before I contacted them, they had published American Psycho in Turkish. I found their address in that book, and thought, “If they published this, maybe I have a chance.” Nevzat’s phone call changed my life. It was very lucky, the kind of luck you usually only see in novels.

Where do you find the inspirations for your stories?

Everything first begins with the Turkish dictionary, with words. First I find a word, and then I try to tell the story of this word. Before each novel, I am also preoccupied with some question about humanity. The word and the question are the bosses of the whole work, the story is the general manager, and the characters, places, and situations are all slaves to the story. For example, in the novel Piç (Bastard), I wrote it just to fill the space between two words, which were “piç” and “hiç”. But a publishing house doesn’t publish two words; you have to write a novel between them. So I wrote a novel, but just to see these two words at the beginning and the end.

You write about very dark, violent situations where children, especially, are the victims. Do you research these topics beforehand?

When violence occurs between two people it’s not important whether they are Swedish or Japanese or Turkish. Their ages don’t matter either, because violence has such hot energy that it melts you and you become the same material. If you know violence, you can describe it between any two people, because violence is the same everywhere; it’s an international language. You can be an incredible intellectual with thousands of novels in your memory, you can be a man who doesn’t even know how to write, but when you are confronted with violence, your reactions become the same.

So I just build these situations for the stories. For example, in Az (The Few), the story told me to create characters who were born in cells — cells with walls made of human flesh. I created two characters in that situation, and then gave these characters the will to leave their cells. There are a lot of prisons made of human flesh in this world: family, religious cults, the army, all kinds of human organizations.

Why did you put the characters in Az through such extreme situations?

In Turkish, the word “az” made me think about the trouble that these two letters went through to be pronounced together. Every letter between them was an obstacle that they had to overcome. So if we take this concept and put it in the lives of two characters, they would have to start out very far from each other. They would have to be in really extreme situations, impossible situations.

I also used extreme situations to play on the notion of misunderstanding. This really interests me, especially when misunderstanding becomes the easiest way to think that you understand people. You have the feeling of being everywhere with National Geographic without even going, but you are not the one holding the camera. You are just seeing what the cameraman sees. In Az, it was interesting to think about a girl in a burkha and a man who is living in a world of BDSM, who totally misunderstands what he’s seeing and fantasizes about her when in fact he doesn’t understand her at all.

What other themes do you feel most compelled to write about?

Situations that push people to act like someone else. The sum of the situations that push you to act like someone else: that’s what we call life. The biggest question in life might be: What percentage of you is really you, and what percentage is society? If Robinson Crusoe had been born on his island to a dead mother, what would have happened? What would his culture be? What would be his morals, for example, his way of doing things? What would he understand about being bad and being good?

Do you yourself believe in an absolute moral code?

No. I think that life is an ensemble of situations that people are entering and exiting. People are defined by their situations. So you can be good right now, and bad two hours later – it depends on the situation. It also depends on who’s holding the camera. The world is relative. The only things that are not relative are human rights, I think.

What are you currently working on?

I’m working on a novel and a play script. They both might be out in 2013. I worked with DOT theater company on the play version of my novel Mandrel last year, and they’re fabulous at what they do, so I want to work with them again. In the theater, there are so many different instruments to work with: movements, colors, sounds. You have to demolish your novel, just keep the title and setting, and write from zero for the theater. When I adapted my novel Mandrel to the theater, I ended up with two Mandrels: the novel, and a play that started the same way but ended up totally different. Writing a play inspires you to do totally different things with a story.

Have you ever thought about writing graphic novels? Your plots and characters seem to lend themselves to that genre.

Yes! I really like graphic novels and comic books. Alongside all the novels that gave me inspiration, there were also many comic books.

Who are your favorite authors?

Everything starts with Louis-Ferdinand Céline, the author of Journey to the End of the Night. This is the first novel I fell into, and it’s not possible to get out. The first few times I read it, I just soaked in the colors. But I’ve read it again and again, and every time I read it, something different keeps me in this novel. And in Turkish, Oğuz Atay. He lifted the limit for Turkish writers to a new height. From his work, we understood that you could write anything in Turkish. He showed us that you can use this language to describe even the travels of toads like a Nascar race.

Regarding contemporary Turkish writers, I like İhsan Oktay Anar and Murat Uyurkulak. They have very pronounced styles. A writer’s style is like an autobiography of the author hidden in the story. These writers, and all authors who have their own way of telling a story, are inspirational. All artists give and take inspiration. You take a paper, you fold it, you give it to another, he folds it, gives it to another, and eventually it becomes a boat. Yet the one who made the last fold is not really the one who made it a boat. There’s a chain of people there.