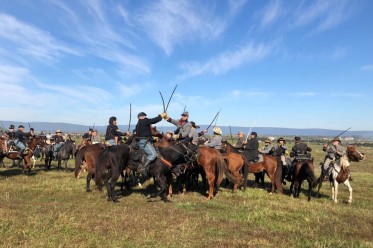 MIDDLETOWN, Va. (Reuters) – Sporting a Confederate flag shirt near a field clouded by cannon smoke, where blue- and gray-clad soldiers reenacted a Civil War battle from 155 years ago, Larry Caldwell Piercy, Jr. said he sees a new war looming in the United States – and a role for himself in any fighting.

“It would be all guerrilla warfare, not this open field-style kind of thing,” he said, gesturing at the reenactment of the 1864 Battle of Cedar Creek in Middletown, Virginia, earlier this month. “I would probably be an officer in that effort.”

Piercy, 62, is one of the motorcycle riders known as the “mechanized cavalry” of the Sons of Confederate Veterans, which has an estimated 30,000 members and describes itself as a “non-political heritage organization” that preserves the history and legacy of soldiers in the pro-slavery Confederacy in the 1861-1865 Civil War.

He is also a fierce supporter of President Donald Trump.

As Democrats push to impeach Trump and controversy rages over whether to remove monuments to Confederate generals like Robert E. Lee and Stonewall Jackson, Piercy warned a new civil war is brewing.