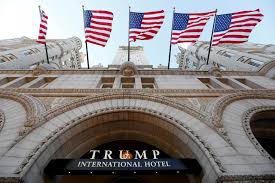 The Kuwaiti government could pay up to $60,000 to President Donald Trump’s hotel in Washington for a party it held on Wednesday in an early test of Trump’s promise to turn over profits from such events to the U.S. Treasury.

The Kuwait Embassy hosted an event to mark their National Day. Similar National Day celebrations at the Trump International Hotel for a crowd of several hundred can run from $40,000 to $60,000, according to cost estimates from the hotel seen by Reuters. The hotel declined to comment on the figures.

One of Trump’s lawyers, Sheri Dillon, pledged at a Jan. 11 press conference to donate any Trump Hotel profits from foreign governments to the U.S. Treasury.

The White House and Alan Garten, the general counsel for the Trump Organization, did not return calls for comment on whether any profits from foreign government payments to the hotel have been donated. Dillon’s firm declined to comment.