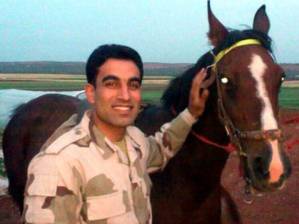 Gaziantep, Turkey – Lieutenant Farhan al-Jassem is not a reluctant soldier, but sadness lurked behind his smile and deep brown eyes when he talked about the last two and half years he spent trying to fight what he considers the good fight in Syria.

On a sultry July night in a tea garden in southeastern Turkey, Jassem, 29, leaned back in his plastic chair and gulped down several bottles of water as he told the story of how he came to lead a key Syrian brigade receiving training and equipment from a U.S.-organized military coalition to take on the Islamic State. As he spoke, 54 members of the larger division his brigade belonged to were finishing up their training with U.S. Special Operations soldiers at a base located roughly 200 miles to the northwest.

Jassem got his first taste of the country’s roiling civil war in early 2012, when he was conscripted into Syrian leader Bashar Al-Assad’s army, but he hated it and bought his way out, paying $400 for permission to visit his home town of Manbij, 40 miles northeast of Aleppo. There, he quickly joined the anti-regime Free Syrian Army, before moving to a smaller Turkmen brigade and then to the so-called 30th Division, created by the United States and its allies as the vanguard of Washington’s effort to roll back the Islamic State’s territorial gains.

When he spoke to the Center for Public Integrity in July, Jassem had passed an initial round of vetting to join the training and said he expected to participate in the next class—so long as the U.S. coalition kept its promises to the first set of graduates, especially a promise that the coalition would “protect us against our enemies after the program ends,” he said.

But Jassem’s fate suddenly took an uncertain turn on July 28, when he was captured by a rival anti-ISIS militia, known as the Nusra Front, which is affiliated with Al Qaeda and therefore an enemy of any Syrian close to Americans.