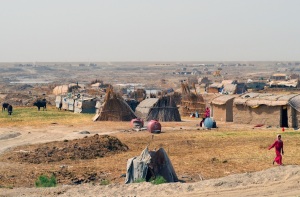 This spring, National Geographic Young Explorer Julia Harte is traveling along the Tigris River from Southern Iraq to Southeastern Turkey, documenting ancient sites and modern communities along the river before they are transformed by the Ilısu Dam, an 11 billion-cubic-meter hydroelectric dam that will generate 2 percent of Turkey’s power.

The region that gave rise to human civilization as we know it, the heartland of ancient Mesopotamia, the original referent of the Garden of Eden – Iraq’s lower third has been many things, but today it is the site of a wrenching ecological and human struggle.

Driving north from Basra along the Shatt al-Arab, the waterway that forms at the confluence of the Tigris and Euphrates Rivers, desert engulfs you. The only patches of color on the landscape are posters for Iraq’s April 20 provincial elections.

As the road branches and you turn northwest, following the route of the Euphrates away from the Tigris, the river takes some time to appear.

The Euphrates no longer extends all the way to the Shatt al-Arab, according to Jassim Al-Asadi, director of the Southern Iraq branch of the environmental NGO Nature Iraq. It has been diverted back into the Awhar, or Mesopotamian Marshes: a vast wetlands nestled into the crook of the Tigris and Euphrates confluence.

For millennia, Marsh Arabs lived in these marshes in reed huts, hunting and keeping water buffalo for sustenance. But in the 1990s, the marshes were drained by former Iraqi President Saddam Hussein, displacing hundreds of thousands of Marsh Arabs. After the fall of Hussein, the marshes began to come back, aided by the efforts of Nature Iraq.

But in 2007, a massive drought hit the area, and the levels of the Tigris and Euphrates have been falling ever since, the water loss exacerbated by more than 40 new upstream dams that have come online in the past three decades. In the central marshland district of Chibayish, where Al-Asadi was born, he says the population dropped from 60,000 to 6,000 in just three decades.

According to passages from the Bible, the dehydration of the Euphrates River would portend the end of the world. Photo by Julia Harte.

The marshes aren’t the only place in Southern Iraq threatened by the drought and by upstream dams currently under construction on the Tigris River, of which Turkey’s Ilısu Dam is the biggest.

Farmers throughout the region have suffered huge losses in the recent drought years, partly due to the lack of modern irrigation technology in Iraq. Some have migrated to cities in search of new work; others have resorted to suicide.

When water rights are discussed in this context,  passions tend to rise. Diplomatic language fails to convey the tremendous impact that a single dam project can have on millions of lives.

So when I had the opportunity to separately interview three key players in the debate over Turkey’s half-finished Ilısu Dam, just weeks before flying to Basrah to begin my expedition along the Tigris River, I wasn’t surprised that each invoked a proverb to express his opinion on the project.

Waja’alnā mina l-māi kulla shayin hayyin. “By means of water, we give life to every living thing.” That Koranic verse sums up the importance of the Tigris River in Iraq, according to Bakhtiar Amin, Human Rights Minister of Iraq from 2004 to 2005.

Amin anticipates dramatic declines in the quantity and quality of the Tigris River in Iraq after the Ilısu Dam. It will reduce the Tigris River’s downstream flow from 20 billion cubic meters (BCM) to just 9 BCM, he says, destroying about 670,000 hectares of arable land in Iraq. When the river level gets that low, Amin warns, saline water from the Persian Gulf will also infiltrate the Tigris. Recent drought years have already resulted in salty tap water throughout the lower third of Iraq.

Not gone yet: what remains of the Euphrates River is helping replenish the central marshland — and the culture of the Marsh Arabs. Photo by Julia Harte.

Although the most controversial project of its kind in Turkey, the Ilısu Dam is just one of 22 hydroelectric dams constructed in Turkey under the Southeastern Anatolia Project (GAP). Eighteen have already been built in the region since the Turkish government approved the project in 1982. Some estimates project that GAP will have reduced the overall flow of the Tigris River in Iraq by 80 percent when complete.

Komşusu açken tok yatan bizden değildir. “We cannot sleep satisfied when a neighbor is hungry.” That’s the Turkish proverb that Ahmet Saatçi, President of the Turkish Water Institute, uses to respond to the anxieties of downstream stakeholders.

“If our neighbor is thirsty, of course we will help him. Historically we have shown this,” he says. The dam must be built, according to Saatçi, to shore up Turkey’s energy supply and lessen its reliance on imported energy, mainly from Russia and Iran. He has heard the concerns of Iraqis, but says they “lack data” and are mainly “emotional talk”.

Saatçi argues that Turkey is pioneering wastewater treatment plants, and will be happy to export the technology to Iraq to ameliorate any salinization that Turkey’s dams cause in the Tigris River. Iraqis themselves must learn to use water more efficiently, he adds, with modern irrigation techniques. Furthermore, he says, Turkey has always maintained the flow of the Tigris into Iraq at 500 cubic metres per second — Amin disagrees, saying the current rate is more like 200 cubic meters per second — and previous Turkish dams have never hurt Turkey’s downstream neighbors.

Some would disagree; Turkish police had to foil attempts by Syrians to blow up the largest GAP project, the 27-billion-cubic-meter Ataturk Dam, which reduced the Euphrates to a trickle for 30 days after it was opened in 1990.

A little lamb in the market of the camels. That’s what Iraq is, compared to upstream neighbors such as Turkey, says Talib Murad Elam, Advisor for Agriculture and Food Security in the Kurdistan Regional Government of Northern Iraq.

“At the moment, we’re importing 96% of what we eat and drink from Iran and Turkey. So us having an agricultural industry is not to the benefit of our neighbors,” says Elam.

In Kurdistan, which is already experiencing large-scale urban migration and the transformation of rural villages from producer units to consumer units, the loss of more than half the Tigris River will “spell disaster,” according to Elam. “It’s a lifeline for 33 million people,” he says.

Over the course of this trip, I’ll boat through the Mesopotamian Marshes and visit modern Marsh Arab homes, spend a day at the ancient Sumerian city of Ur, interview farmers in Southern Iraq about the difficulties they face, stay with nomads in Iraqi Kurdistan to observe the role of the Tigris in their seasonal migration routes, travel overland into Turkey, document ongoing archeoloogical excavations and already unearthed wonders at the soon-to-be submerged ancient town of Hasankeyf, interview the Turks and Turkish Kurds that have been or will be displaced by the Ilısu Dam, and visit other archeological sites in its floodpath.

My next post from Southern Iraq will be all about the wildlife, human inhabitants, and archeology of the Mesopotamian Marshes. Check back soon!