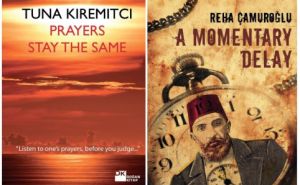 Summertime calls for a certain type of book: not too dense to weigh down a day at the beach, but not so vapid that it loses your interest after the first chapter. If you’re seeking a slim, absorbing novel that will still pack a literary punch, consider these works by two prominent but little-translated Turkish novelists. Under 200 pages each, they’ll transport you away from the August heat of Istanbul and keep your attention until you want to return.

The title and shimmering sunset on the cover of this book make it seem like a very different type of text. But don’t be turned off. Kiremitçi isn’t a born-again zealot or soppy sentimentalist. Rather, he’s a skilled and versatile fiction writer, with a knack for storytelling in unconventional ways.

Prayers Stay the Same takes the form of a series of conversations between two women: Madame Rosella, an elderly German lady with a mysterious past, and Pelin, the young Turkish university student who answers an advertisement to sit and speak with Madame Rosella in Turkish each week.

Although they meet in an unnamed Northern European city, each woman has a powerful, troubled connection to Istanbul. Madame Rosella survived the Holocaust by moving there to live with her husband’s family, although he and her parents had to remain in Europe. Pelin, an Istanbul native, feels that she has been exiled from her native city by her father so that he can enjoy his girlfriends without worrying about her.

As the women grow closer over the course of many conversations, they begin, tentatively, to lick at each other’s emotional wounds. Pelin has been estranged from her mother since the age of four, when her mother ran off with another man. Madame Rosella is besieged by memories of the loved ones she lost to the Holocaust, and by fears of her own impending mortality. Their conversation rarely lingers on such depressing realities, however. With touching affection, they exchange compliments, jokes, memories, and idioms from their respective social worlds.

Far from writing pages of idle chatter, Kiremitçi uses their conversation to show the reader a sepia-colored version of Istanbul in well-researched depth: the city as it was during the World War II years to a foreign Jewess living on Büyükada, peeping at the artistic and social culture from behind the protective embrace of her in-laws. Pelin’s world is no less masterfully fleshed out. She could be one of many young, expatriated Turks of today, nostalgic for her homeland and isolated in the grey, calm order of a European city. The English translation makes the voices sound slightly disjointed in parts, but never enough to detract much from the story.

The book’s take-home message is about the universality of longing. As Madame Rosella tells Pelin, “Even if the deities are different, the prayers are the same, Mademoiselle. …Before condemning someone, you must first listen to his prayers carefully. Only then, you can really know that person.” A short but profound sentiment — much like this novel.

In 1905, Istanbul was seething with intrigue. Just four years later, Sultan Abdülhamid II would be deposed by the Young Turks, following months of revolution and counter-revolution. In the build-up to those historic events, however, the seat of the Ottoman Empire was the scene of high drama.

The Ottoman Empire had spent the past several decades embroiled in conflicts at home and abroad, bleeding territories and falling into deep foreign debt. In an effort to re-unify his disintegrating empire, Abdülhamid II dismantled the Ottoman parliament and constitution, and persecuted the Christian Armenian population in eastern Anatolia. His subjects were divided over his rule. While he still enjoyed boisterously supportive crowds at his public appearances, splinter groups such as the Young Turks or the Armenian Revolutionary Federation (ARF) were busily plotting to bring him down.

A Momentary Delay examines one early attempt to do so by ending Abdülhamid II’s life. Little has been written about this July 21, 1905 assassination attempt. Publicly available historical research indicates that the plan was engineered by the ARF in collaboration with a Belgian anarchist, Charles-Edouard Jorris. The plot was remarkably elaborate: it involved constructing a carriage identical to the one used by the sultan himself, and filling its trunk with 200 pounds of explosives, detonating the device as the sultan walked out of Yıldız palace after his daily prayers.

Where gaps exist in scholarly knowledge of the incident — the Ottoman court’s awareness of the plot beforehand, the dynamic between Jorris and the ARF, the individual motivations for the participants — Çamuroğlu provides a gripping back story. He has resarched the era well enough to depict each character and scene in realistic detail.

Çamuroğlu’s version of events features  an undercover cop who tries to investigate Jorris and runs afoul of Ottoman officials conducting their own clandestine intelligence work. He sketches various social hierarchies of the time, from the league of pashas who advised Abdülhamid II most closely to the guild of porters that served the palace as an informal mob-control squad. Jorris and his wife are the main characters of the tale, and portrayed with nuance, not simply as villainous failures.

Only one aspect of the book detracts significantly from the otherwise deft narrative: the quality of the translation. Every page contains at least one grammatical mistake or typo, and the sentence structure is often incorrect or awkward. Many expressions and descriptions seem to have been translated directly from Turkish, without regard for how they would strike a native English reader, making some passages totally incomprehensible.

For readers who want to learn about this momentous period in late Ottoman history through the telling of a prominent Turkish novelist rather than a history book, however, A Momentary Delay will still be a rewarding read.